Get Loud with The Monster Jam - The Most action packed live event on four wheels!

Are you obsessed with destructive monster trucks? Well if you want to experience fast paced action from gate open to gate close, then get your Monster Jam tickets now- Brought to you by PartsAvatar Auto Body Parts!! 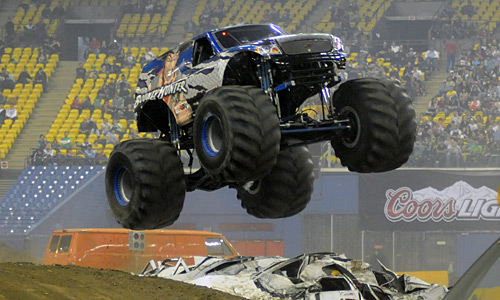 If you are struggling to buy a perfect gift for your friend this Christmas, then why not buy him Monster Jam Tickets? Monster Jam is a family friendly and high octane spontaneous event featuring monsters jumbo trucks in the world.

The eye popping designs and styles of turbocharged beauty continue to push the boundaries of strength and style. Over the years, the Monster Jam had been receiving overwhelming response from the crowd. So, want to know more about this event?? Scroll down then!

Shows and Competition in Monster Jam
At each Monster Jam show there are two styles of competition- side by side racing and freestyle. In the smaller events donuts contest and wheelie competitions are held.
In the freestyle competition, the driver have a limited amount of time and a free track to do whatever they want to please the crowd.

The freestyle truckers show off their skills as they drive over the cars and do jaw dropping stunts and tricks with their trucks. Freestyle usually gets the crowd really into it since they are the judges.

In side by side, the trucks cross the obstacles to cross the finish line or to win the champion racing trophy by winning the race.

Beasts of the event

Now let us get face to face with the stars of the show i.e. the Monster trucks. Each Monster Jam truck is 10.5 feet tall, 12 feet wide, 17 feet long and weighs 10000 pounds. Monster Truck produces beastly horsepower of 1500 and all credit goes to the blower.

Methanol fuel powers the engine which is consumed at the rate of three gallon per minute. The tires are 66 inches in diameter and 43 inches wide and each tire weighs 800 pound. Driver’s compartment is a steel safety structure mounted to the truck frame.

Each competition features off road beasts i.e. the ATVs and Speedsters which are another form of off road sporting vehicle used to maneuver over rough terrain. Let us now have a look at some of the beasts that attract hundreds of thousands of people. 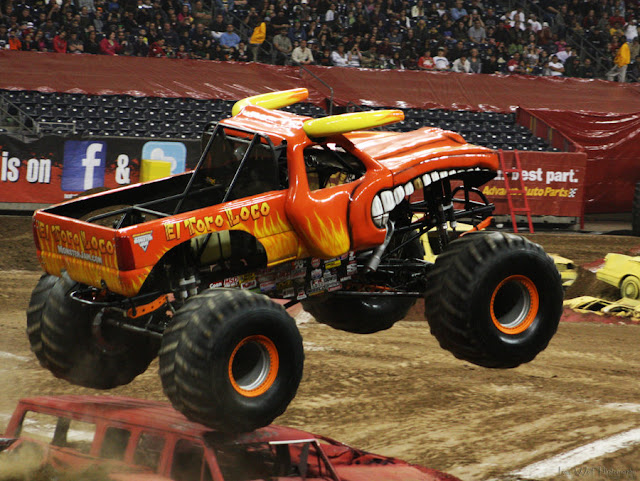 El Toro Loco is a monster truck in professional Monster jam series. It features one of the first 3-D body shells, with horns sticking out of roof. The custom built bull and its Mexican raging style was introduced to Monster Jam fans in 2001.
It is driven by Marc McDonald, Chuck Werner, Becky McDonough, Mark list etc.

Dragon- The fiercest one!
Dragon is the fiercest looking one in the entire fleet. It was introduced in 2014 and it features spikes jutting through its skin and long horns curling back atop its skull with angled fins slicing the air. It is driven by Scott Liddycoat from Suffolk.

Zombie- The after world monster truck!
Zombie was picked to comeback from the after world in Monster Jam. Zombie debuted in 2013 with experienced driver Sean Duhon who tamed previous monster truck “Superman”. In 2017, Zombie will be represented by drivers Bari Musawwir, Tyler Groth and Ami Houde. 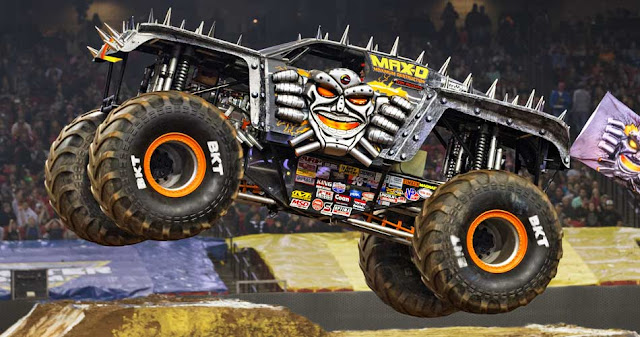 Max-D debuted in 2003 and was officially classified as “Futuristic SUV”. It had the history to be driven by most successful competitors like Tom Meents.
Now that you are familiar with the monster trucks, have a look at the entertainment stuff in the event.

Pit Party
Monster jam events kick off with a pre show Pit party which is a best opportunity for fans to meet the drivers and get autographs and selfies with them. It is to be noted that pit party requires separate ticket for entry.

You can spend as much time as you can in the pit party and it has plenty of activities for almost every age group.

They are many featured elements after the opening ceremony to keep the crowd full throttle. Below are some of them, so take a look.
A judged competition known as wheelies is held in some events where the drivers will have the opportunity to bring at least two wheels into the air.

If you love to see your favourite truck rotating, then Donut will keep you glued at your seat. Trucks perform in flat areas and rotate as many times as they can. Wheelies and donuts are judged competitions.

The other styles i.e. freestyle and side by side that you have already read above are also judged competitions.
A panel of audience who view the competition and assign a value to the performance form the judges of the competition. Each judge can score from 1(lowest) to 10(highest).

Safety is the first priority of drivers. Monster trucks are designed to protect the drivers. Specially constructed seats that mold to the driver’s shape allow the work to be done with minimal distraction. A five point harness is mounted securely to the truck to help hold the driver in position.

Not only driver’s safety is ensured but their fans are also safe in this event. Why are we so confident while saying this? Well, the track designers include safety hold consisting of several rows of seats nearest the venue’s show floor. During monster truck performances, it is made sure that this area is clear of spectators.

Interesting Facts about Monster Jam and trucks!
Each year a crowd of about 4 million can be seen cheering on their favourite trucks in monster jam event.

For the event every year the Monster trucks get the vans, cars, airplanes, buses and ambulances from local junkyard. On an average the crush 3000 vehicles every year!


So, ready to grab your tickets? Head on over to ticket master to buy them!
By Auto Parts Geek - September 08, 2017
Email ThisBlogThis!Share to TwitterShare to FacebookShare to Pinterest
Labels: aftermarket car parts, aftermarket performance auto products