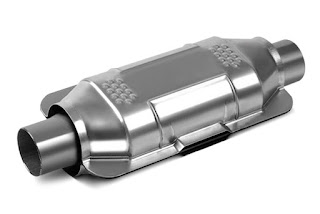 All cars have exhaust system to transfer combustible gases away from the engine. Exhaust system of car not only reduces the emission of gases to the atmosphere but also helps the engine to run more efficiently. With the increase in number of cars on the road, air pollution level has also increased rapidly. Fortunately, nowadays cars come with a device called “catalytic converter” that helps in reducing air pollution and harmful gases emitted by car’s engine.  A catalytic converter is an emission control device that decreases the toxicity of gases and diesel engines by basically catalyzing a redox reaction.
For deeply understanding catalytic converters let us understand the term catalyst. Catalyst is a compound that can start a chemical reaction without affecting itself. It just makes a chemical reaction run faster. It speeds up the process of removing the pollution.
A controlled combustion reaction needs to occur inside car engine for operating the internal combustion in car's engine. But it also produces harmful gases in the air. So as to decrease the harmful gases in the air modern automobiles are equipped with catalytic converters. Today, catalytic converters are mandatorily used in trucks, cars, motor bikes, mining equipments and even stoves.

Catalytic converter is a metal box underside your car and has two pipes coming out of it. The task of catalytic converter is to convert these harmful compounds into less harmful compounds before leaving the exhaust. One of its two pipes is input pipe and its function is to bring in hot and polluted fumes from engine’s cylinders. Second pipe is called output pipe which is connected to the tailpipe of car's exhaust or exhaust. A chemical reaction triggers whenever the gases from engine fumes blow over the catalyst, separating pollutant gases and converting them into less harmful gases.

A combination of platinum, palladium and rhodium is used as catalyst in catalytic converter. The metals coat the ceramic beads within metal casing of exhaust pipe. The catalytic ceramic beads provide maximum surface area for the reaction to take place by using less amount of catalyst.

Reduction and oxidation reactions take place inside the converter. Gases flow through honeycomb like structure that is coated with catalysts and made of ceramic. Honeycomb structure gives them enough space for reaction.

First with the help of reduction catalyst such as platinum and rhodium, catalytic converter reduces nitrogen oxide into nitrogen and oxygen gases.
In the second stage of oxidation reaction, catalyst as platinum and palladium turn carbon monoxide into carbon dioxide.  Another oxidation turns unburned hydrocarbons into water and carbon dioxide.
As we can see, there are three reactions going on in total. Therefore, these are called three way catalytic converters.

In the end, the exhaust produces gases such as nitrogen, oxygen, carbon dioxide and water (steam form).
In gasoline engines, about 90 % of hydrocarbons, carbon monoxide and nitrogen oxides are converted into less harmful compounds. So these are much efficient in gasoline run engines.
As catalytic converters work at high temperatures, its efficiency is very less in diesel run engines.

1. The best way to search a good catalytic converter is to find the converters that fit with your vehicle’s year, model and design.

2. In the engine compartment, you can see a vehicle emission control information tag. This emission certification helps you to choose a better converter for your vehicle.

3.  You can opt for direct fit or universal fir design. Direct fit will give you a hassle free fitment while universal will require cutting, welding or fabrication. As compared to direct fit, universal fit is a cheaper option to opt for. Keeping in mind your requirements and specification you can easily make your choice.

Excessive oil or carbon could clog a catalytic converter. When this happens, the engine will not accelerate and may stall after a few minutes. An engine with a clogged converter may send error code from car Oxygen sensors to computer. A clogged converter should be replaced by professional.
Due to additive run in the engine, they can also become poisonous. This causes the converter to work less efficiently.

Catalytic converter deteriorates when leaded gasoline or rich fuel mixture is used.  A rich fuel mixture produces high temperature that causes the parts in converter to melt.
The lead in leaded gasoline adheres to and coats the catalyst, which then can’t do its conversion job on polluting gases. A thick coat of lead builds on catalyst. The end result of this is that the exhaust gases are kept from coming into contact with the catalyst.

Other harmful substances that can damage a catalyst converter are sulfur, manganese and silicon. They can enter the exhaust stream through the leak in the engine.
Depending on the contaminant, sometimes a poison can be reduced by running the engine for a long time under heavy load. The increased temperature may vaporize the contaminant from its surface. But it is very difficult to remove lead deposits because lead has high boiling point. So it is advised to always use unleaded gasoline in your vehicle.

The OBD diagnostic systems are designed to alert a driver to a misfire condition as misfire conditions could severely damage catalytic converters.
Because catalytic converters are made up of expensive metals like platinum, rhodium, palladium and even gold, they are target for thieves. Bolt on converters can easily be cut or removed of the late model vehicles or SUVs. It can cost more than $1000 to replace. 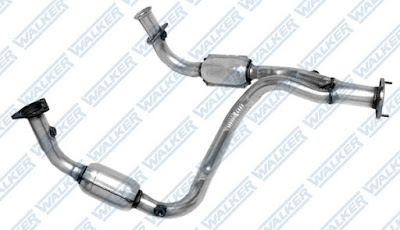 Direct fit and universal catalytic converters are aftermarket options available. car's Direct fit catalyticconverter exactly matches the design or model of your car. If you are considering a high performance engine then go for direct fit converter. Direct fit converter components are specially designed using specific length and pipe width to take advantage of vacuum that hot gases produce when they leave the exhaust manifold. Not only they increase engine performance but also they reduce noise. But they are costlier as compared to universal converters.

Universal converters are designed to fit for various trucks, cars or vans. They can hinder the effectiveness of a direct fit converter thus decreasing engine’s performance. They are generally cheaper than the direct fit converters. But its installing is quite complicated as compared to direct fit.
While making choice, vehicle’s design should be kept into consideration along with other factors that could affect the installation of converter. You could take a professional’s advice or follow standards specific to your vehicle’s state.
Direct fit converters are also available under affordable prices at partsavatar.ca. So if you are looking for aftermarket purchase of exhaust system auto parts and catalytic converter components then do visit partsavatar.ca.
By Auto Parts Geek - March 20, 2017
Email ThisBlogThis!Share to TwitterShare to FacebookShare to Pinterest
Labels: aftermarket auto parts, car replacement parts, direct fit catalytic converter, engine, exhaust parts, exhaust system, internal combustion in engine, oxygen sensor, tailpipe